Breaking The Cycle of Negative Feedback

Our surveys suggest Value Management is the third biggest challenge IT Business Partners face. Given where we currently are as an industry it is also a fundamental enabler on gaining credibility with our peers. I argue that a lack of Value Management (and as part of that Continuous Improvement) in an organisation is the root cause to why IT departments find it so difficult to get beyond what I call a “Service Partner” level. That is where an IT department provides a service but it is frequently let down by service outages or project overruns, hence the IT department has a low level of credibility.

Let me explain how this is so through the use of feedback in an organisation. An example of feedback is where the driver constantly adjusts the steering wheel of a car to navigate round a corner. Too much or little feedback could have disastrous consequences.
To pursue this example a little further, lets say this car has a passenger. Depending on how well the driver adjusts the steering wheel will give confidence to the passenger that the driver is in control, and whether or not they have to worry about getting to the destination.
So the question to ask the passenger at the end of the journey is “would they trust the driver again to take them to their destination another time?” And what would the driver do if the passenger said "no"? Well, they could:

An equivalent example in business is described in the diagram below. Here, the “car” is being driven badly. This is a negative feedback loop. 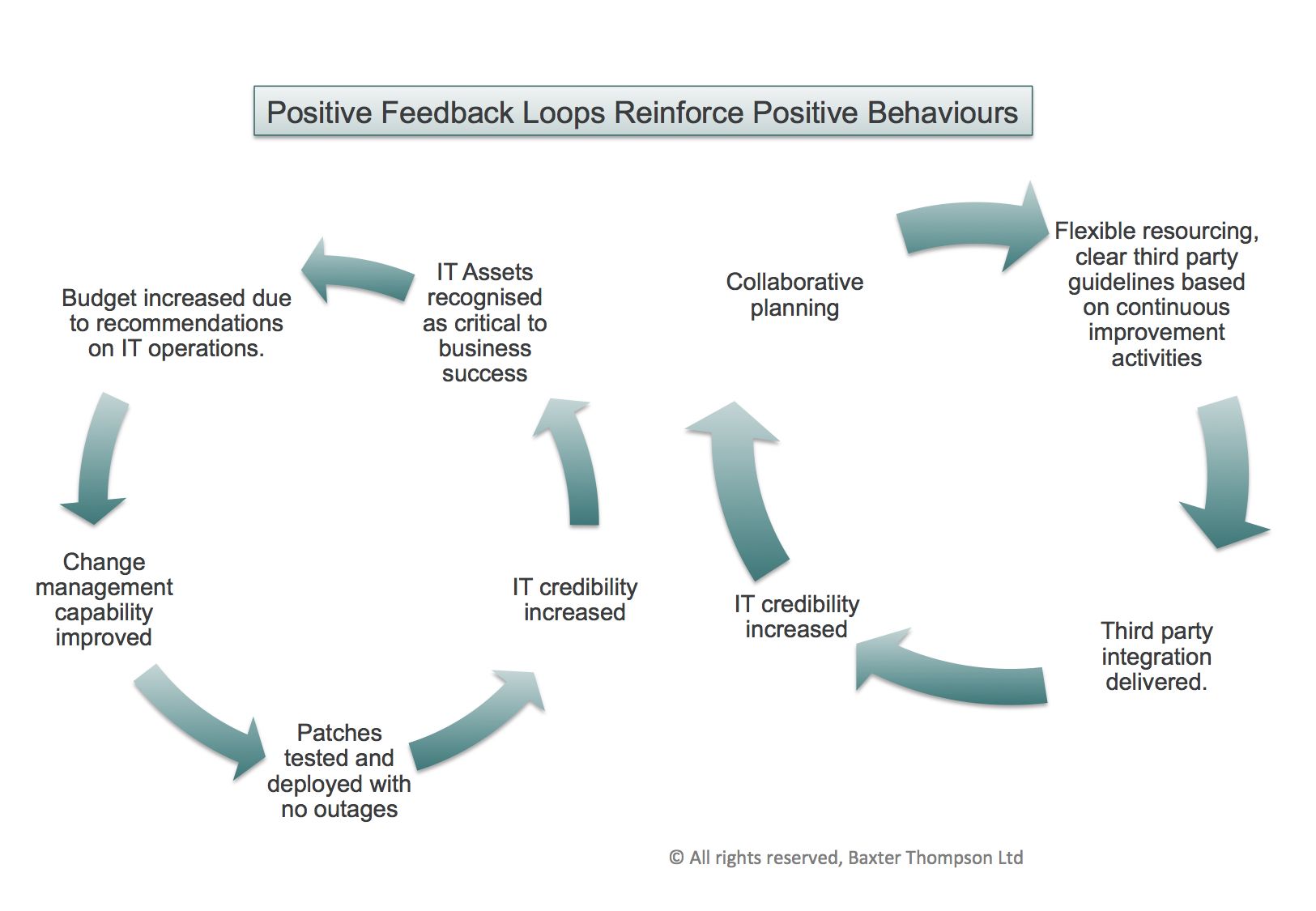 Another example above is where the “car” is being driven well. This is a positive feedback loop.
How do we go from one state to the next? I suggest the only way to have a positive long-term outcome and to generate credibility is to practice until perfect. Breaking the negative feedback cycle starts with the driver. If they can demonstrate improved driving skills then they get increased credibility. We don’t learn to drive in a day – practice until perfect is making small improvements, little and often over time in a consistent way. In other words, apply Value Management (with Continuous Improvement) within the organisation. This is where performance improves to the point that there is sufficient credibility and trust that the passenger tells their friends how good the drive is and they want a ride too!
Simply put, Value management links the business outcomes to an IT activity, validates how well that outcome was achieved, and how well IT enabled that outcome. The difference between what was forecast and realised gives us the opportunity gap to improve. Continuous Improvement is looking at that opportunity gap, identifying the root cause and implementing changes to the way we work so that over time that opportunity gap reduces.
Some principles:
It’s very difficult to do as evidenced in our surveys. One of the best ways to understand and kick-start the process is to do a “[email protected]” simulation game. At the start of this game, all players are forced into a situation where they cannot perform. They have to learn. Quickly. The game is played in a series of rounds, allowing the players to continuously improve. Not only do players get a real sense of what value management and continuous improvement feels like in reality, the benefits of doing this with their colleagues helps overcome some of the challenges that afflict them in their organisation.
We found the challenges surfaced in the simulation game typically boil down to teamwork, communication and process / workflow. Doing a simulation game like this on real world issues demonstrates that value management and continuous improvement can be done by those people who in past have been accused as being part of the “problem” – now they are part of the solution!

To become a Strategic IT Partner